What appeared to be throngs of hundreds of protesters remained at the home of the president of Sri Lanka as of Tuesday after occupying the residence and sending President Gotabaya Rajapaksa fleeing to an undisclosed location this weekend.

Rajapaksa — the last Rajapaksa family member still holding a top government position after months of protests forced several brothers and other relatives out of cabinet positions — agreed to step down from the presidency following the seizure of his home on Saturday. The president is expected to officially step down on Wednesday to allow for the country’s Parliament to organize an “all-party” unity government. Prime Minister Ranil Wickremesinghe also agreed to step down this weekend after protesters burned his house down.

Wickremesinghe became prime minister for a second time in May after predecessor Mahinda Rajapaksa, Gotabaya’s brother, resigned in the wake of protesters burning his house down. 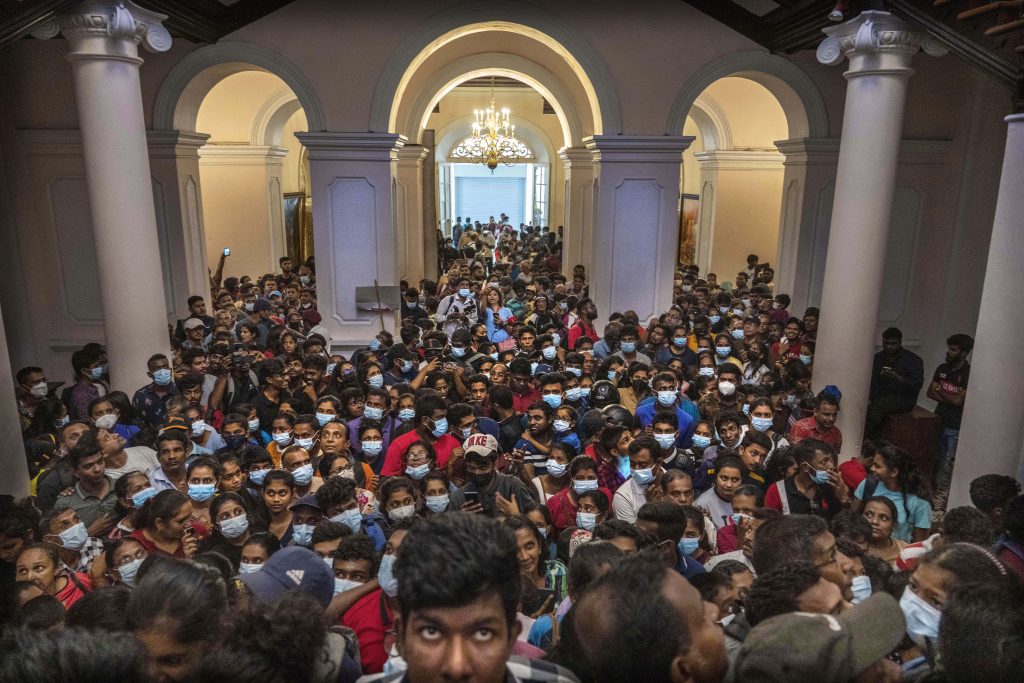 The Democratic Socialist Republic of Sri Lanka is in the throes of the worst economic crisis in its history, the result of the Rajapaksa dynasty implementing dangerous “green” policies like banning chemical fertilizers and taking out large, risky loans as part of China’s predatory Belt and Road Initiative (BRI). The fertilizer ban, an attempt to shift to 100 percent organic farming, resulted in Sri Lanka becoming dependent on imports for food, which it can no longer purchase because it ran out of foreign currency. Attempts to shift away from fossil fuels have resulted in daily power outrages and extreme gasoline and other oil and gas product shortages. People dying in hours-long lines for fuel has become a common-place occurrence throughout the year.

Socialist economic management has resulted in dire shortages of food, medicine, and nearly every other basic good. 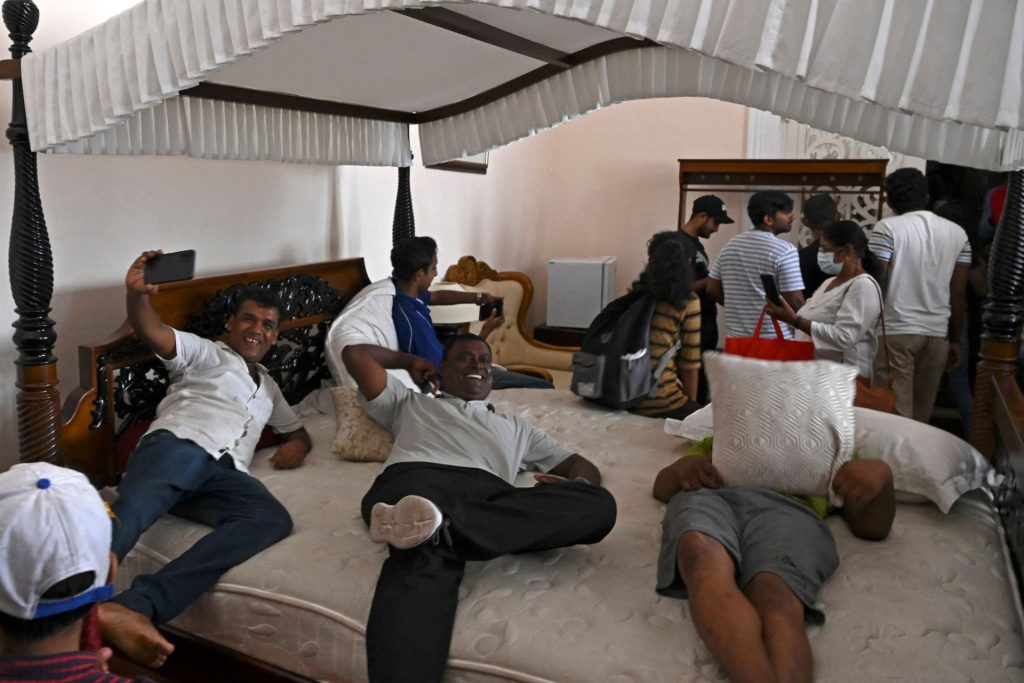 People crowd inside the Sri Lanka’s presidential palace, in Colombo on July 10, 2022, a day after it was overrun by anti-government protestors. (ARUN SANKAR/AFP via Getty Images)

“My children are miserable. They’re suffering in every possible way. I can’t even afford a packet of biscuits or milk for my babies,” a Sri Lankan mother told the BBC in a report published last week.

Wickremesinghe, shortly after becoming prime minister in May, announced that the entire economy had “completely collapsed.” 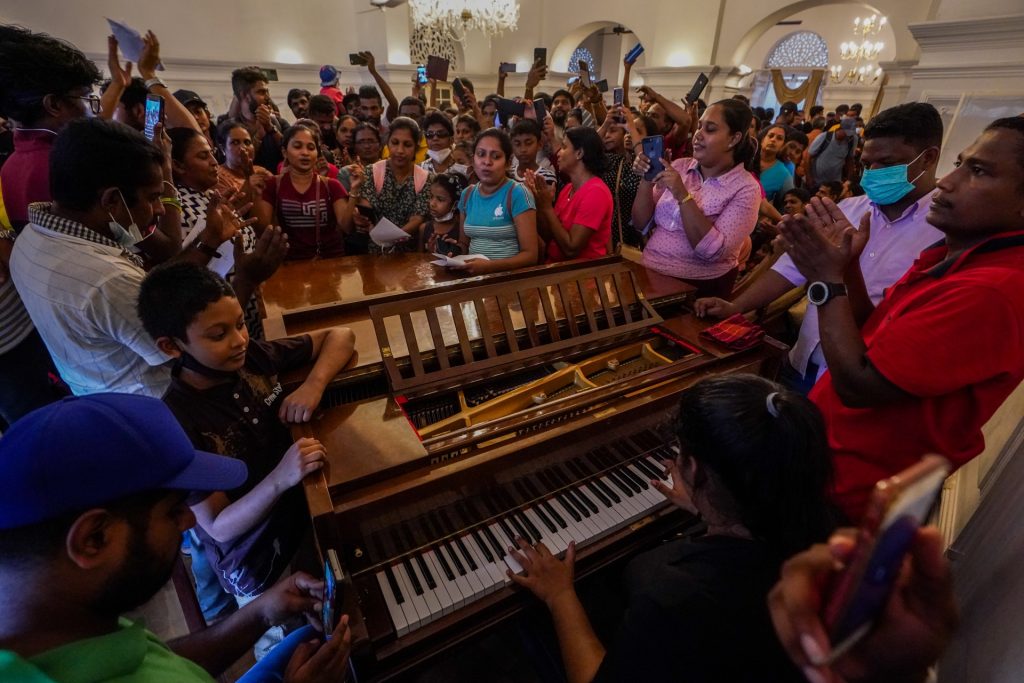 Thousands of people crowded the capital to take a look into the President’s palace two days after protesters stormed into President’s house in Colombo Sri Lanka on July 11, 2022. (Thilina Kaluthotage/NurPhoto via Getty Images)

As of Tuesday, so many Sri Lankans had convened at the presidential palace to illegally tour the site that they had organized into lines to ensure everyone got a chance to walk in. Gotabaya Rajapaksa’s location remains unknown at press time, though government officials insist he has not left Sri Lanka. 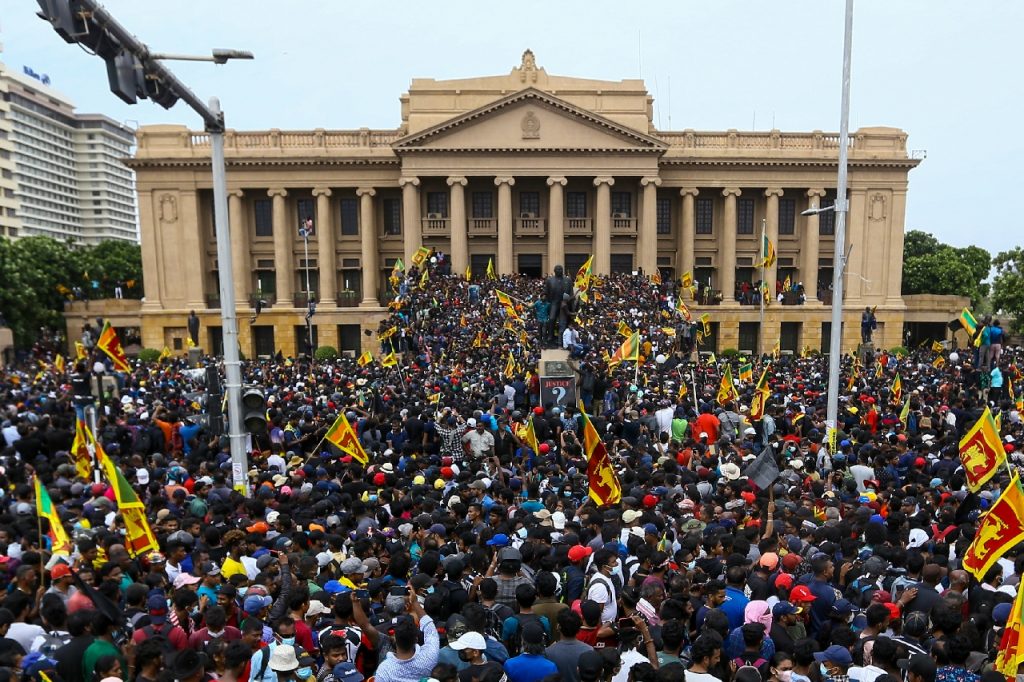 “Many people across the country visited Colombo to see the President’s House, the Temple trees House, and the President’s Office, which were taken over by protesters,” Sri Lanka’s News First reported. “People have been waiting in line for hours to enter the premises to see for the first time what was inside the most protected residence in the country.” 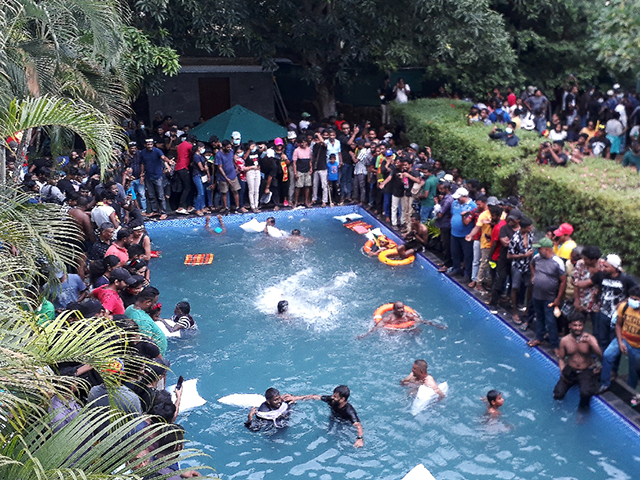 News First described Temple Trees as “open for the public,” though offered no indication that either Rajapaksa for the Sri Lankan government made the home public in any formal way. Temple Trees is the formal residence of the prime minister, though presidents have used it in the past and Wickremesinghe was not believed to be living there. 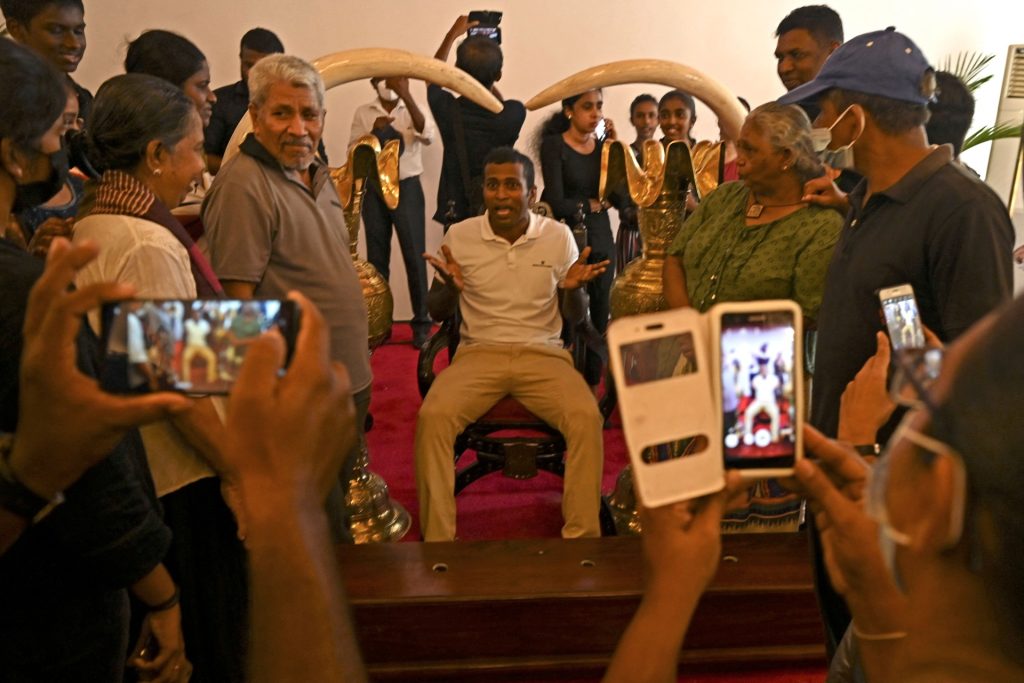 People pose for pictures inside the Sri Lanka’s presidential palace, in Colombo on July 10, 2022, a day after it was overrun by anti-government protestors. (ARUN SANKAR/AFP via Getty Images)

Videos from inside the palace posted by the Daily Mirror national newspaper showed a festive atmosphere inside. At one point on Monday, a group of protesters had taken over Rajapaksa’s piano and began a large group sing-along.

Protestors playing the piano and singing at Temple Trees which has been occupied since the 9th of July. #DailyMirror #SriLanka #SLnews pic.twitter.com/vNeVVeHkjF

Early on in the seizure of the official president and prime minister palaces, the protesters appeared to be more concerned with using the site than destroying it. Photos surfacing from the event showed individuals using the president’s shower, lying in bed watching new coverage of their occupation and throwing a massive pool party, complete with presidential floaties.

Starving Sri Lankans also took the opportunity to feast on the luxurious foods the president’s kitchen was stocked with.

“The vast dining rooms and kitchens had variety of foods including the finest imported stuff. The bar had a variety of single malts and the protesters were having a whale of a time,” Janith Weerasingha, one of the protesters, told the Sydney Morning Herald. The Australian newspaper described Weerasingha as a fishing entrepreneur. 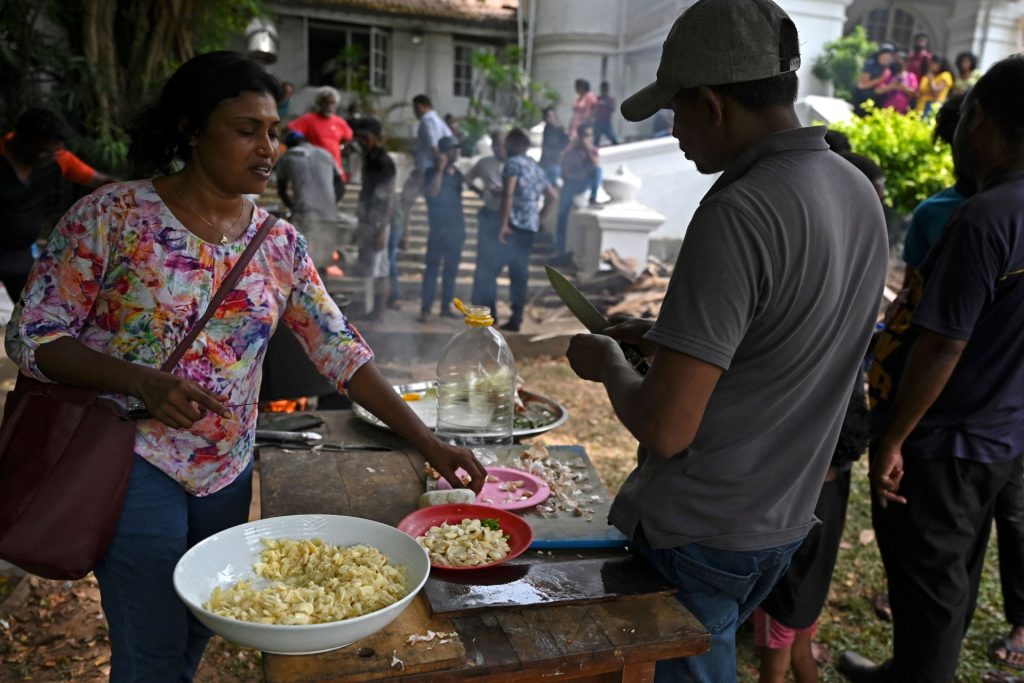 The U.K. Guardian also reported that some of the protesters had set up an impromptu “community kitchen” and began cooking free meals with the pantries of the government buildings taken over.

The Herald reported that many of the protesters who had departed the scene on Saturday night returned Sunday morning to clean up garbage and otherwise attempt to restore some order to the area. Some protesters left handmade signs around Temple Trees urging others not to destroy paintings and other priceless artifacts that are part of the history of the country. In one particularly notable sign of goodwill, the protesters found 18 million Sri Lankan rupees (about $50,000) in cash and handed it over to the police. 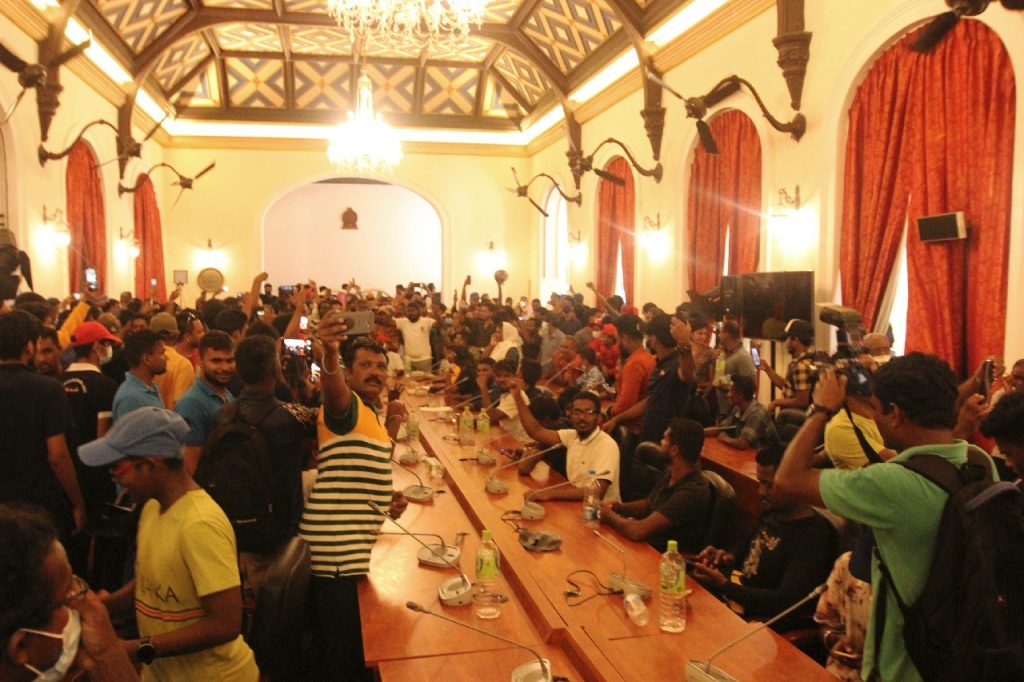 The colonial-era palace is Sri Lanka’s new symbol of ‘people power’ after the president fled. (AFP)

“Outside, refuse from Saturday’s mass gathering was picked up, the Galle Face promenade was scoured, and the raucous scenes witnessed both in Colombo and Galle – where Australia and Sri Lanka are into day three of a Test match — were replaced by an eerie calm,” the Herald narrated.

By Tuesday, the party had appeared to create enough exhaustion and strain to breed violence. Sri Lankan news agencies reported that at least ten people were hospitalized on Tuesday after a brawl broke out between two groups of people inside the palace. The reports did not detail what occurred to cause a fight or who the two factions in the dispute were.

Police also reported on Tuesday that presidential staffers at Temple Trees had filed complaints of mass theft and property destruction, though authorities did not specify what was stolen from the palace.

‘The BASL unequivocally states that at this decisive time in our county it is absolutely necessary that all citizens, respect the Rule of Law and Constitutional Governance,” the Sri Lankan Daily Mirror reported. “It is not in the best interests of our country or its people to ignore the provisions of the Constitution which is the framework under which Sri Lanka is governed.”

Prominent Buddhist leader Omalpe Sobitha Thero similarly held a press conference on Tuesday demanding that people should vacate the government buildings in light of the fact that Rajapaksa agreed to resign and should be leaving office on Wednesday. He appeared to indicate that protesters should leave after Rajapaksa vacates the office to ensure the safety of the historic buildings.

Sobitha Thero suggested that, should the public not ensure the security of the sites in question, “conspiracies that we do not even know about, might be orchestrated to destroy these important national properties.”

Starz Free Trial 2022: How to Watch Starz For Free With Hulu, Amazon