On his first trip to the Middle East of his presidency, President Joe Biden visited Israel, where he extolled the “bone-deep” relationship between the U.S. and Jerusalem and pledged to increase economic connections between the two countries going forward.

What You Need To Know

Biden was officially welcomed during a ceremony in Tel Aviv’s Ben Gurion Airport and is receiving a briefing on Israel’s Iron Dome and Iron Beam air defense systems. He later traveled to Jerusalem for a wreath-laying ceremony at Yad Vashem, Israel’s memorial to Holocaust victims in World War II.

“Every chance to return to this great country, where the ancient roots of the Jewish people date back to Biblical times, is a blessing,” Biden said Wednesday. “Because the connection between the Israeli people and the American people is bone deep.”

“We have a full agenda over the next few days, because the relationship between Israel and the United States covers every issue that matters to our mutual future,” said Biden, who was making his 10th visit to Israel.

Biden said he’ll spend the trip reaffirming the United States’ commitment to Israel’s security and bolstering the countries’ connection on science and innovation.

He also said he’ll discuss his continued support for a two-state solution with the Palestinians, although he conceded that is “not in the near term.”

“We’re united in our shared values and our shared vision,” Biden said. “I’m looking forward to our time together over the next few days. May Israel and the United States continue to grow and prosper together for the benefit of the entire world.”

Israeli Prime Minister Yair Lapid said Biden’s visit is “both a historic visit and a deeply personal one” and called the American president, who is visiting the country for the 10th time, “one of the best friends Israel has ever known.”

Biden is spending two days in Jerusalem for talks with Israeli leaders before meeting Palestinian President Mahmoud Abbas on Friday in the West Bank.

He will then fly directly from Israel to Jeddah, Saudi Arabia — a first for a U.S. president — on Friday for talks with Saudi officials and Gulf allies attending a summit in the port city.

Because of concerns about a rise in COVID-19 cases, top White House officials said Biden would try to limit physical contact during the trip. At the arrival ceremony, Biden mostly skipped handshakes and offered Israeli officials fist bumps. But he made an exception by sharing a hearty handshake with opposition leader Benjamin Netanyahu. The president also put his hand on the shoulders of several Israeli dignitaries.

The president received a briefing on the country’s “Iron Dome” and new “Iron Beam” missile defense systems and visited the Yad Vashem memorial to Holocaust victims.

Biden, wearing a yarmulke, was invited to rekindle the eternal flame in the memorial’s Hall of Remembrance. Two Marines placed a wreath on the stone crypt containing the ashes of Holocaust victims. Biden bent down to adjust it and placed his hand over his heart as the Marines saluted for a moment of silence. Biden listened in silence as a cantor recited the remembrance prayer.

Biden then greeted two Holocaust survivors, Rena Quint, 86, and Giselle Cycowicz, 95, and kissed the women on their cheeks.

“My mother would say ’God love you, dear,’” Biden told them.

“Did you see the president hug me?” said Quint, according to The New York Times. “He asked permission to kiss me and he kept on holding my hand.” 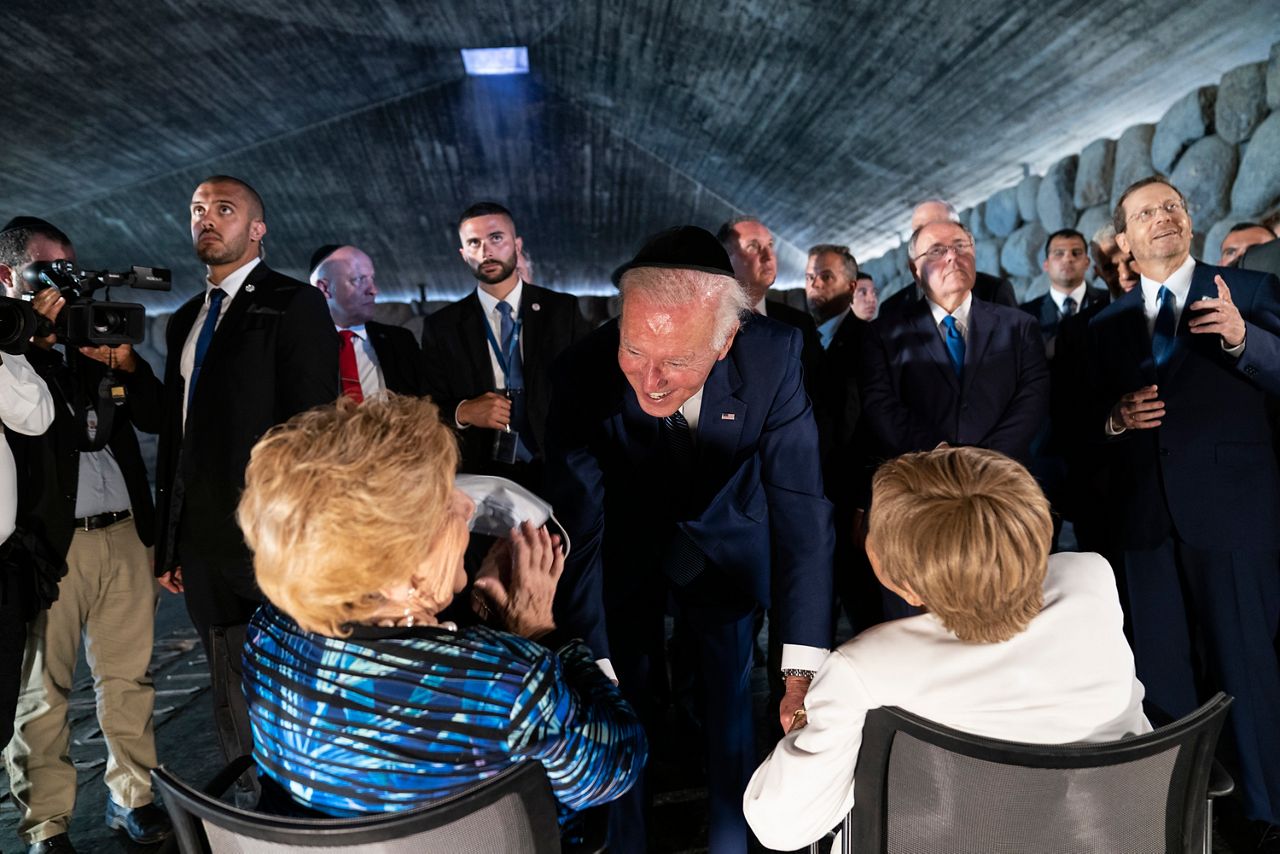 The president left a note at Yad Vashem’s visitors’ book, which read, according to the pool: “We much never, ever, forget because hate is never defeated. It only hides. We must teach every successive generation that it can happen again unless we remember. […] Never forget.”

The president is set to meet Thursday with Israeli officials and on Friday with Palestinian leaders.

Biden said he will emphasize in talks with Israel and Palestinian leaders his continued support for a two-state solution to the Israeli-Palestinian conflict. But he acknowledged that it likely wouldn’t be feasible “in the near term.” Biden is spending two days in Jerusalem for talks with Israeli leaders before meeting Palestinian President Mahmoud Abbas on Friday in the West Bank.

Biden added that a two state-solution is the best way to ensure a “future of equal measure of freedom, prosperity and democracy for Israelis and Palestinians alike.” Biden’s national security adviser, Jake Sullivan, said that Biden would not offer any proposals during the trip aimed at restarting talks.

Biden, in a Washington Post op-ed published Saturday, laced into Trump for quitting the nuclear deal that Britain, France, Germany, Russia, China and the European Union also signed onto. But Biden also suggested that he’s still holding onto at least a sliver of hope that the Iranians will come back into compliance.

“My administration will continue to increase diplomatic and economic pressure until Iran is ready to return to compliance with the 2015 nuclear deal, as I remain prepared to do,” he wrote.

Israeli officials, who briefed reporters before Biden arrived in Israel, said the U.S. and Israel would issue a broad-ranging “Jerusalem Declaration” on Thursday that will take a tough stance on Iran’s nuclear program.

The declaration commits both countries to use “all elements of their national power against the Iranian nuclear threat,” according to an Israeli official who spoke on the condition of anonymity to preview the statement.

The official said the Israelis would stress to Biden their view that Iran has calculated “time is on their side” and is loath to give any concessions. The Biden administration’s last round of indirect negotiations with Iran in Doha, Qatar, late last month ended without success.

The White House has also been frustrated with repeated Iran-sponsored attacks on U.S. troops based in Iraq, though the administration says the frequency of such attacks has dropped precipitously over the last two years. Tehran also sponsored the rebel Houthis in a bloody war with the Saudis in Yemen. A U.N.-brokered cease-fire has been in place for more than four months, a fragile peace in a war that began in 2015.

Sullivan earlier this week said the administration believes Russia is turning to Iran to provide it with hundreds of unmanned aerial vehicles, including weapons-capable drones, for use in its ongoing war in Ukraine. Sullivan said Wednesday that Iranians showing a willingness to assist Russia is something that should be of great concern to the Israelis, Saudis and other Gulf allies that Biden will be meeting with this week.

“We think that this is of interest, to put it mildly, to countries we will be visiting on this trip,” Sullivan said.

Coronavirus Can Survive on Frozen Meat for a Month